Thousands of years back...

Masaka Kingdom was going through a very good phase. The Kingdom was very much prosperous and everyone was happy with their work and life.

One day during the rainy season...
There was sudden cloudburst and massive flood. Many people suffered due to this.
Along with this, there were huge number of lightening as well and many got killed due to this.

After few years...
It was not a rainy season. But there were sudden white clouds in the sky and massive lightening started which burnt the trees and many people died in Masaka Kingdom and in the near and also distant Kingdoms. And the sudden lightening continued many times. There was a discussion among the Kingdoms regarding this.

Finally, the King of Masaka had to call for a specific group of intellectuals (sadhu/dhyani). The sadhus analysed the matter and came to a conclusion that the lightening might be having some unknown force behind it. They told to the King to contact other kings from distant lands and to plant huge number of plam and dates trees and they would make the trees powerful by their Sadhana. 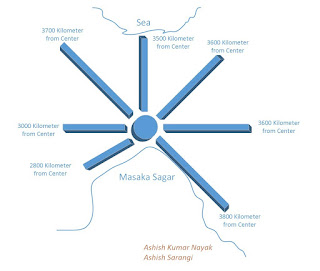 Then the team of sadhus traveled in all seven directions and started making the trees more resistant to lightening by their sadhana. It took few years to complete the task.

In future, whenever there was sudden lightening, the trees used to get hit by it and no people were dead. It continued for few years.

Then the unknown force behind the sudden lightening acted in a different manner. There was huge number of lightening, particularly on the path to north Kingdom, happened for few years continuously which broke the northern spoke of the circular shape created by trees and the sadhana of the sadhus.
This time, the sadhus were not able to find a solution for this.

Slowly the lightening started striking the spokes of the chakra/circle one by one making the chakra weak. 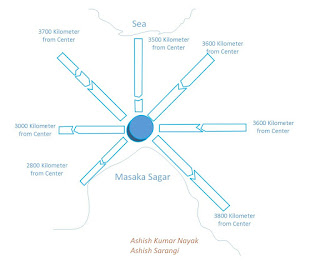 And the years passed...

Slowly, most of the spokes (the trees planted in different directions and empowered by sadhana) almost got destroyed and disconnected from the Center. 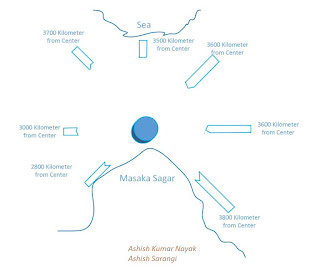 And Masaka Kingdom became alone. The target of  the lightening (or if any unknown) was only Masaka.
In present day too, there are huge number of lightening strike on Masaka and many people die.
No one is sure as to why it happens particularly on Masaka and those intellectuals are not there to save the people.

One day, an elderly person came to Maput (capital of Masaka). He was very hungy. The locals offered him food. While having his lunch, he asked why the people looked sad and came to know the reason.
Then he told to the people "If the tall trees like palm and dates trees are planted, it can attract the lightening towards it and save people. Don't wait for the yesteryear intellectuals to come and save you."

Note: This a fiction.