Please read the Part-1 https://ashishkumarnayakodisha.blogspot.com/2018/11/raaraa-19-magnet-temple.html before reading this blog.

The whole structure of the idol/statue was like the one in the below photo.
It was carved out of a single stone. The base was like a horizontal slab with a vertical triangular portion over it.
In the middle of the vertical triangular shape, you can find a cube shaped structure.
And, the "idols/statues" were carved on both sides of it.
So, there were two statues of two Gods, not one! But why? No concrete reason behind it. 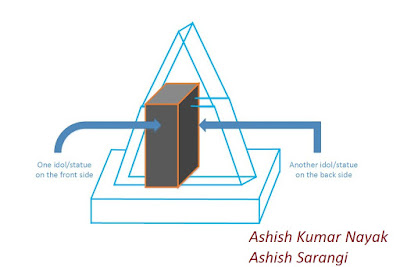 If there were two statues there must be a way to move behind the floating statues.
The bridge-like structure was extended so that people can take a round of the idols/statues, and can view both of them.

Few more questions arise here.
Was the iron block (where statues were carved) rotating like a clock?
Were the magnets able to rotate the statues based on 24-hour time?
Was there any technique that the magnets work according to the impact of the sunlight?

Well, This is beyond our imagination!!!

Is the story over here or did we miss anything?

One day...
A school kid visited there. His brother was working there and as his brother fell ill, he came to inform the chief.
He asked the chief why he was worried. The chief explained the situation to him. The kid then analysed the magnetic structure based on his school studies.

He explained that the reason behind the failure was the "opposite poles of the magnets facing each other". He suggested to place the magnet at the top in such a way that the same pole of both the upper and lower magnet would face each other so that there would be repulsive force instead of the attractive force. And, any pole of the magnets would attract the statue made of iron stone.

And the magnets were placed as in the below photo.

The magnets were successfully placed and the temple was built.

The process of the destruction remains the same as mentioned in the 1st part of the blog.

But what happened to the scientists/architects/engineers/sculptors and the kid who designed/built such a grand temple?
No clues about that!
Did they go somewhere else and built such massive and scientific structure?
That is a mystery!

Time passed and the ruins of the temple are still there but silent.
It is told "Time passes but photo remains" which means, the time will pass but the photo taken in the past will remain for"ever".
Similarly, the ruins of THE MAGNET TEMPLE are like those photos taken thousand years back but no one can see anything in it due to the multiple stories written intentionally about the destruction of the temple!
This story about the temple is also a story, not HiStory.

Note: This is a fiction which is inspired from a temple in Odisha. This blog does not speak anything about any proven history. But, whatever might the history be, if there is any research on the science behind the temple which is currently in ruins, then it will yield good results in future.

Posted by Ashish Kumar Nayak at 19:09