The King Biha came to know that neighboring kingdom was invaded by some foreign power called Krujan, many people were killed and state properties were looted.

The King called the minister and ordered him to spread a rumor in the border villages that there were a lot of tiger attacks in the area. Minister was surprised and asked for the reason. King explained in detail. Minister gave a smile and left the place.

After the people came to know about the tiger attacks, the villagers were very much afraid. Ministered assured them that nothing bad would happen to them. King has created new village setup for them. They just had migrate to the new villages. Villagers were not ready to leave the native villages initially but later agreed.

The large scale puja happened. The citizens of Masaka kingdom prayed to Lord Raaga to help them come out of the danger of tiger attacks. The Mahapujak declared that as per Lord Raaga, 16 small scale temples would be built in the border villages and Lord Raaga's idol would be installed there but face of the idol would look like a tiger so that it would control the tigers.

The King called the architects and engineers and explained them about the design of the temples.
The construction process started... 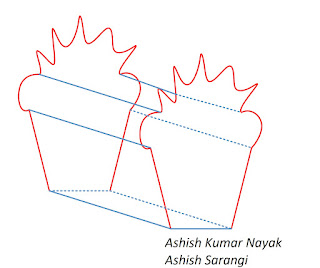 The temple was not built of stones. Instead, iron was used and some technology was put into place.
There were 6 iron pillars on each side of building. On the ground, the structure looked normal. But there
was a long shaft-like cylindrical structure under the ground. The base of the pillars were tied to the shaft-like structure with iron chains. There were two handles by which the shaft could be rotated. 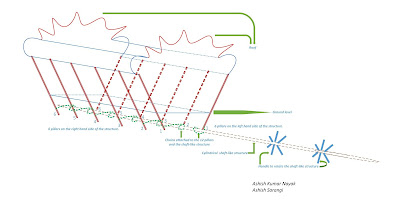 The 16 temples were decorated with the most valuable metals, ornaments etc and were filled with a lot of valuables. After that, the King Biha and all his architects, engineers, soldiers left the villages and came back to the city. The stage was all set for the drama.

For quite some time, there were letters/orders from the invader Kingdom Krujan (who invaded the neighboring Kingdom) to surrender. King Biha sent his messenger with the note that they would surrender.

The invaders arrived the border villages. They entered the temples and started looting.

The Masakan soldiers hiding underground, started rotating the handles of the shaft-like structure. With the rotation, the irons chains started getting twisted around the shaft and the pillars of temples were pulled which resulted breaking the joints between the pillars and the roof. The roof collapsed and the invaders inside the temples and those who climbed the roof to destroy, were mostly killed. 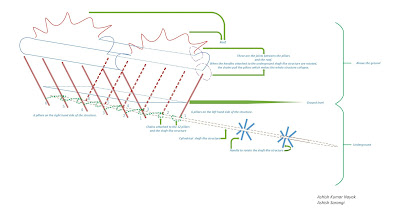 A sound came... Jai Masaka...
It was the voice of King Biha. He was watching all these. Then the King and the Masakan soldiers finished the remaining soldiers of the invader Kingdom in few hours.