GhAnTa Tarakari (ଘାଣ୍ଟ ତରକାରୀ, घाण्ट तरकारी)":
The 8th day of Krushna pakhya of Aaswina month is called as “Mula astami”, Odias celebrate as Dwutibaahaan osha or Dwutia osha . This festival is mainly done by women used for their sons betterment and to get good sons. The god of this Osha is “Dwutibahan”. On this day, the vegetables are kept on a kulaa(pot like thing, made of bamboo pieces) and give to God as bhoga (naivedya). The reason behind this is that some of the vegetables are available in this season.
On the next day, the same vegetables are cooked together to prepare a dish called as "GhAnTa Tarakari (ଘାଣ୍ଟ ତରକାରୀ, घाण्ट तरकारी)".
You can refer the below blog to know more aboubt the recipe.
http://eodisha.org/dutia-osha-ghanta-tarakari-typical-odia-mix-curry-without-onion-garlic/ 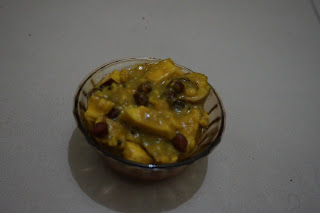 ChhincheDA (ଛିଞ୍ଚେଡ଼ା, छिन्चेड़ा):
During marriages receptions, after the good pieces of fish were served to the people, the head pieces were left. 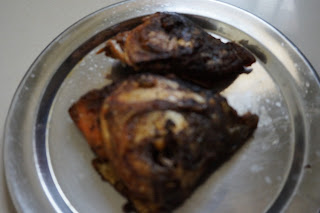 An idea struck to people's mind. And they thought of making small pieces of the head pieces, mixing with vegetables and prepare a new dish. And the new dish got its name as "ChhincheDA (ଛିଞ୍ଚେଡ଼ା, छिन्चेड़ा)". In Odia "Chhinchiba (ଛିଞ୍ଚିବା, छिन्चिबा)" means "to sprinkle". But here, it was meant for mixing. 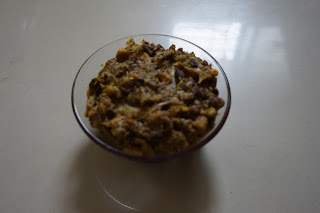 MudhiGhAnTa (ମୁଢିଘାଣ୍ଟ, मुढ़िघाण्ट):
Some people thought of not to mix all vegetables and just to mix potato, buta dali(chana dal), head pieces of fish and prepare a dish. The dish got its name as "MudhiGhAnTa (ମୁଢିଘାଣ୍ଟ, मुढ़िघाण्ट)".
But in Odia "Mudhi" means "puffed rice". So, though this dish name starts with Mudhi, it should not be confused with puffed rice. In Mayurbhanj district of Odisha, people eat Mudhi(puffed rice) with nonveg curry. So the dish MudhiGhAnTa might have got its name there. Or otherwise, Munda(ମୁଣ୍ତ, मुण्ड) means "Head" and since the fish head is mixed it might have got the name MundaGhanta & then gradually change to MudhiGhanta.

Usage of potato in nonveg curries:
In old days, when the people who were not able to afford huge quantity of nonveg food like kings, they had to satisfy themselves with the limited amount.
After Potato was introduced to India during Portugese and British time, people once tried mixing potato with nonveg curry and it tasted good as potato absorbed the flavour of nonveg, not the other way round. And it also increased the quantity of the nonveg dish.
Gradually it became a food habit and people started using potato in fish, chicken, mutton, prawn curry in regular basis.

Posted by Ashish Kumar Nayak at 22:12

Email ThisBlogThis!Share to TwitterShare to FacebookShare to Pinterest
Labels: Food