There was a time when all the street vendors had to have only mobile shops. Whether it is fruit shop or panipuri shop or anything else, all had the same destiny. As usual, the vendors had to keep their shops on public place. It used to cause traffic issues.
And also there used to be regular conflict between govt authorities and the street vendors as the vendors were considered as illegal entities on public place and so encroachments. The authorities used to remove the encroachments and after sometime the same issue again as the street vendor also needed to earn their living. This was just a firefighting situation not resulting in anything. This issue could not be addressed for a long time.

But the time had to change when a visionary thought came into light.

It was during 2006 to 2009.
The then chairperson of BMC (Bhubaneswar Municipal Corporation) started the process of regularizing the process of street vending.
After multiple talks between the city authorities and the vendor organization, a model involving special vending zones was collectively agreed.
In this process, bamboo-structure kiosks were constructed in the vending zones in the 1st phase. 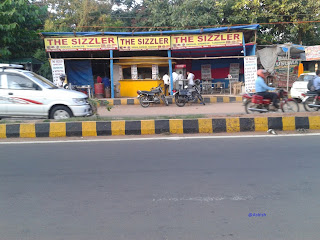 Then in the next phase, iron-structure fixed kiosks were made.

Then some sponsors were contacted who can sponsor and put theirs ads on the vending zones. Few sponsors only came for this purpose.

Then it was the role of some NGOs who came for the help and extended their support the vendors and municipal corporation to construct the vending kiosks.
Now the street vendors got a permanent place for their business.

And Bhubaneswar became the 1st city in India to implement the street-vendor-bill before Central Govt could think of such bill.

Email ThisBlogThis!Share to TwitterShare to FacebookShare to Pinterest
Labels: Social