King Bijaa was the ruler...

The time of festivities... People were happy enjoying the annual festival.

Suddenly the minister came and informed the King that there is an unprecedented by a King Kutrak of the Kingdom Kutraka.
King thought that it would not be wise to inform the people about this as they were enjoying the festival.
So, the King marched with his troops fought against the enemy, but the citizens did not have any idea about this.

But the King Kutrak was very cunning. He sent some of his soldiers to the civilian area through a different route.

Bijaa fought with Kutrak and defeated him and rushed to the people.
When he reached the villages, many people were killed. The situation was very worst. The King immediately arranged for the medical treatment and rehabilitation of the people.

After one week, when the situation became normal, King Bijaa visited the places where the civilians were killed.

He asked the people among the pujari/priest class, "What happened?". They told that there were hundreds of soldiers with weapons and we were not able to fight with them with mere sticks.

He then asked the people who belonged to arts/accountancy/business class. They also had the same answers like the pujari families.

He then asked asked the people who belonged to the farmer class. They told that they took up the farming instruments and fought against the enemy soldiers and killed many of them.

IT WAS A LEARNING POINT for the King Bijaa...

He called for his advisers and discussed with them about the instruments used by different class of people.

The warriors families have the war weapons. 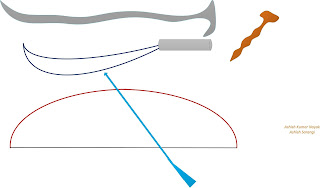 The farmers have the farming instruments which can be used as weapons if required. He sent some soldiers to train the farmers to fight more effectively when required.

But... What does the pujaris and the arts/business class people have to use as weapons???

Someone told that the pujaris use a metallic pot to store water for puja and the lamp/deepa is also made of metal.
After a lot of discussion, they found a way. 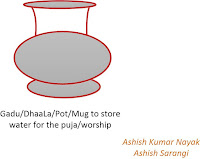 A long pipe was attached to the pot with a sharp end. On the opposite side, a handle was attached. At the bottom, it some spikes were attached.

Next was the metallic deepa/lamp.

The front was made pointed like an arrow. Some spikes were attached to the base. A handle was attached.

The pot and lamp were designed in such a way that it could be used as weapon.
It was given to the pujaris and some soldiers stayed with them and trained them how to use it as a weapon in case of sudden attack by enemy.

Next discussion was about the people who belonged to arts/business class. They used lekhani or the pen made of metal.

The backside of the pen was made like a cup. In the middle of the cup, there was a small piece of iron with the screw-like design. In the middle of the cup-like structure, there was a small hole.
Another big rod was taken with a hole inside it and screw-like design so that the pen can be fixed with it easily. After the it was fixed, a small piece of iron was inserted in the small hole which would make the instrument more stronger.

It was given to the arts/business calls people and some soldiers stayed with them and trained them how to use it as a weapon in case of sudden attack by enemy.

That was the time when different groups of people used the instruments for making a livelihood as the ASTRA to fight a war.

King Bijaa, his soldiers and his citizens fought bravely and defeated Kutrak and his army and Masaka Kingdom was safe.

Posted by Ashish Kumar Nayak at 21:00