In the Kingdom of "Sakti", there was a king named "Icchasakti"...

He was pro-people. He did a lot of work for the betterment of citizens.

The main problem in his Kingdom was heavy rains and flooding and sometimes there was no rain causing the drought. So he thought about seriously and came up with a plan. He called his ministers and explained them. Then the ministers started working on it.

The geography of the Kingdom consisted of hilly areas and coastal plains.

And this solved the water problem when there was huge rains in the hilly areas and no rains in the coastal plains. 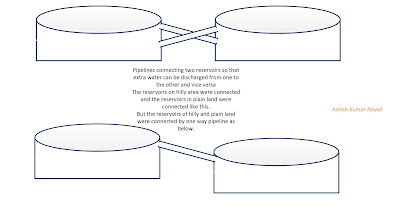 And this solved the water problem when there was huge rains in the coastal plains and no rains in the hilly areas. 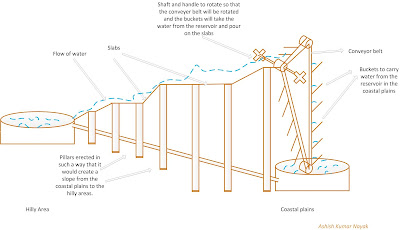 But, when there was huge rains throughout the Kingdom, the above solution was of no use. Still, people were happy that at least there was a solution when there was no rains.
.
.
.
Thousands of years passed. There Kingdom is not there. Some of the family members of the King Icchasakti became the landlords. A girl named "Sakti" was the successor of the King. She had the similar qualities like the King Ichhasakti.
Due to sea water, there was massive coastal erosion and people used to vacate their villages and move to a new place.
Sakti saw from her childhood that there were three types trees which could control the erosion of the coast.
When she became the head of the landlords, she called for a meeting of all landlords and explained them what to do for solving the issue.
Then the plantation drive started near the coast.
As in the drawing below, Mangrove trees were planted near the place where the sea water touched the coast. The mangrove trees would hold the soil tightly and reduce the force of the sea waves.
Next to it towards the mainland, casuarina trees were planted, which would hold the soil tightly.
Next to it towards the mainland, cashew trees were planted, which would hold the soil tightly and also increase the production of cashew by giving a livelihood to the people.

And this move reduced the coastal erosion. 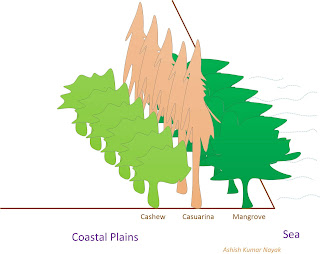 When Sakti was 100 years old, her grandchildren became politicians and some of them were ministers as well.
One day, Sakti told her minister grandson to take her to sea beach as she wanted to see the plantation she initiated when she was young. Grandson took her to the beach. Sakti was disheartened to see that most of the trees were cut and the sea water started eating the landmass. She asked "Boy, What is this? Who did all this? As a minister, why are you not protecting the trees? Can you imagine how many people will have to leave their houses because of the coastal erosion?". Grandson tried to avoid the questions. But, when Sakti insisted, he replied "We are here do politics, not social service. If we will solve all the issues, then we will not have anything to promise in the next election".

Sakti remained silent.
A thought came to her mind. *There was the King Icchasakti. The name literally means "Will power". But that will-power is now completely lost among the current generation in her family.*