[Before reading this blog, please have a look at the section "RaaRaa 5 - The legends of 100 Mausakas" in the blog https://ashishkumarnayakodisha.blogspot.com/2017/05/raaraa-2-3-4-5-legends-of-masaka.html just to know about the Mausakas.]

Thousands of years back...

There were 100 groups of tribes in Masaka, known as Mausakas.
There were 100 leaders for each of the 100 tribes.
Mausakas were good fighters as well as they were able to do good cultivation too.

One day...
The elder among the Mausakan leaders suggested "We should once try the voyage in the sea and see what is on the other side.". The other Mausakas and requested for some time to think over it.
15 days passed. They had another gathering and all the Mausakas had a consensus that they would try the sea route once. The family of the tribal leaders had also the agreement to this proposal.

Then, they called for a meeting of all the Mausaka people and explained them about the sea voyage.  Other than the family of 100 Mausaka leaders, no one agreed to it and sea route was unknown and there was life risk too. Everyone tried to stop them for doing this adventure. So, the leaders decided that they would only go on the voyage. 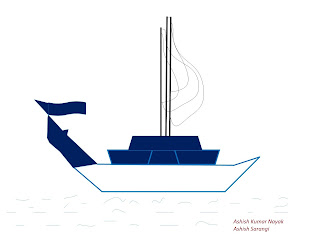 After one week, there was a massive cyclone. The whole Mausakas were very much worried about their leaders who were on the sea voyage. One month passed and they were no news about the leaders. Slowly, one year passed and the leaders never returned!

Now the social stigma started hunting the wives of the 100 Mausaka leaders. Others started telling "The wives should have stopped the leaders from going on the sea voyage. As they encouraged their husbands, they are responsible for the misfortune.". After hearing these for so many days, the wives of the 100 Mausaka leaders decided to leave their respective villages and live in a new place (which was somewhat away from the sea coast) in Masaka with their kids. Finally, they had to do this to avoid the social issues.

Now the wives had to run their family on their own and setup a new village. The 100 ladies worked unitedly, taught their kids about farming and war skills. But they always tried to avoid their kids from going near the sea and always avoided the questions raised by the kids about their fathers.

Few years passed. The boys completed their studies and returned to their home. One day, both of them talked to their mothers about the sea voyage what they heard from their lecturer. Their mothers were really worried with this. They strictly told them not to ever think about that incident or ever try for sea voyage. But the boys explained them and finally convinced them after few months.
The boys then asked other families if they would be interested for sea voyage. But no one agreed and they scolded the boys telling about the incident that happened to the 100 leaders.

So, the two boys decided to start the voyage on their own whether anyone support them or not. Their mothers were worried but could not stop their sons. Boys started the journey.

To the bad luck, there was a storm again. The boys were somewhat able to save the boat but levers with which the boats move, were lost. They were stranded in the middle of the sea. There was no one to help. So for the need of food and water, they thought instantly and caught fish from the sea and took sea water and purified with multiple cloths. They survived like that in the middle of the sea for one month. *They were going to create a history as the SURVIVORS*

The mothers of the two boys had lost hope as the boys did not return. They went to the college and held the lecturer responsible for this as he told them about their fathers.
The lecturer felt guilty for this. He assured the ladies that he would go and bring back the boys.

The lecturer contacted some people and were able to convince some of them for the sea voyage.
They built twelve boats. Each boat had a wooden pillar in it and pot was hanged on the top. The pot had multiple holes on its top portion and lamp as placed inside it. The air could not affect the flame as it was at the bottom of the pot and the light was visible through the holes at the top and it helped them to locate each boat. 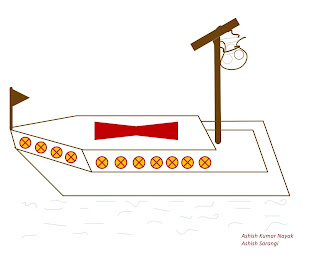 He told everyone to sail three boats in parallel and they moved with three columns and four rows so that they could help each other in case of any natural calamity.
They started their journey. After few weeks, they saw the two boys on their boat in the middle of sea. It can not be explained how much they were happy and surprised. It was just like a miracle.
They brought back the boys to Masaka.
It was a day of grand celebration among the Mausakas for the SURVIVORS. The people from the old village also came to the new village where the families of the 100 Mausaka leaders were residing and apologized for the way behaved them in the past. The whole Mausakas united again.

What next? The Mausakas unanimously decided to start the voyage to distant lands.
And...It marked the beginning of a new journey towards prosperity.

Posted by Ashish Kumar Nayak at 21:28